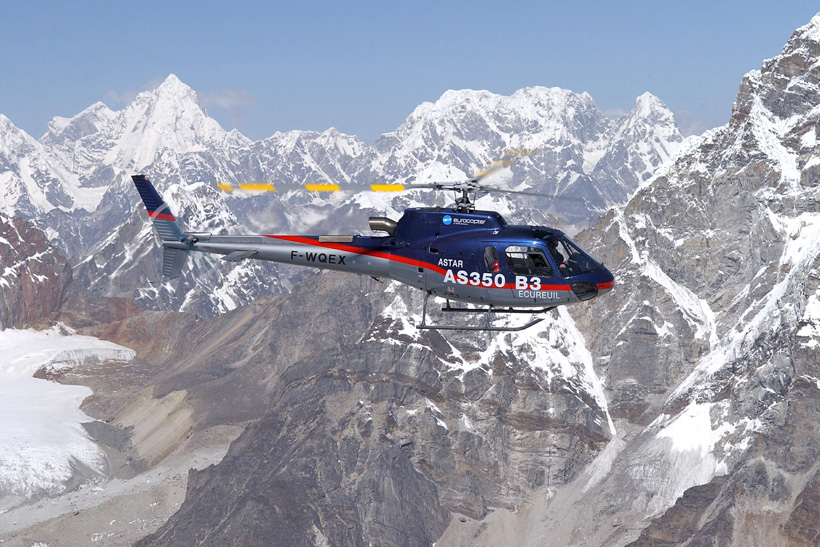 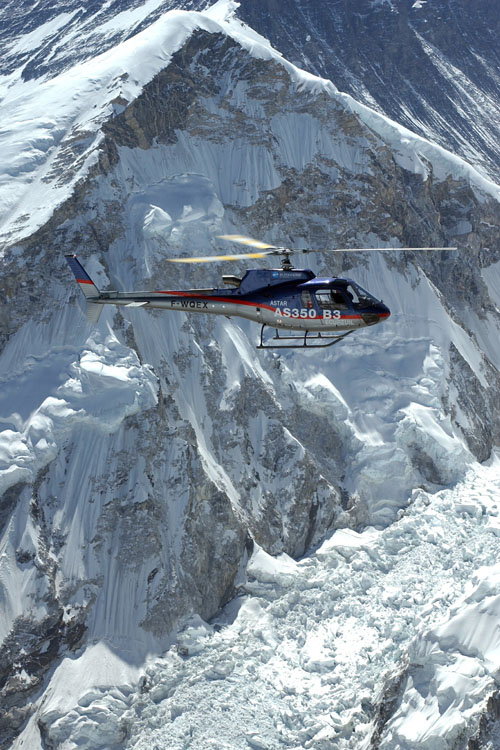 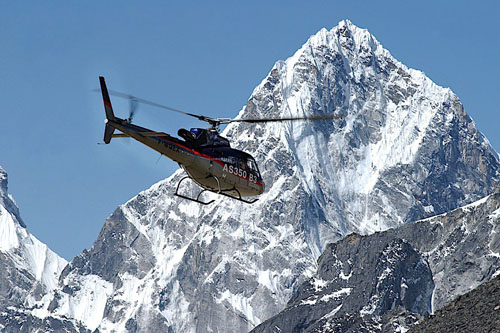 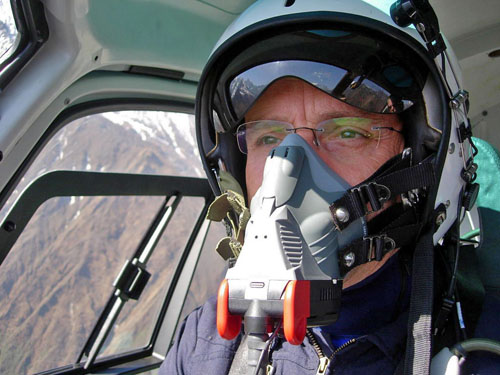 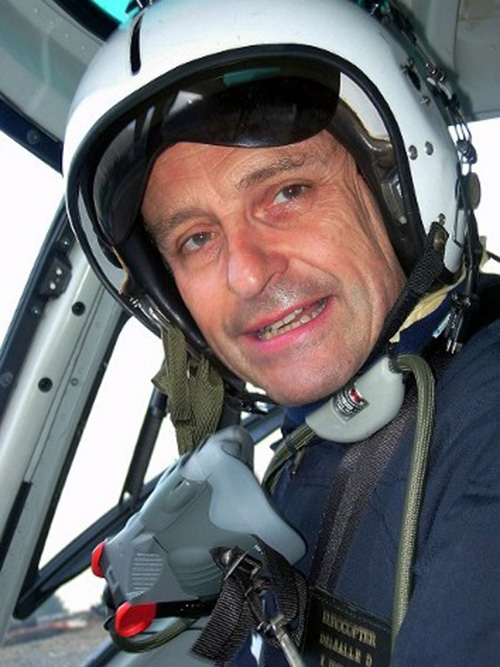 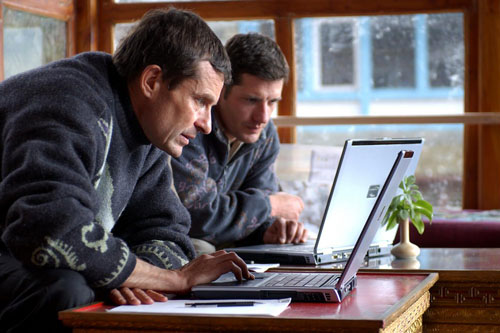 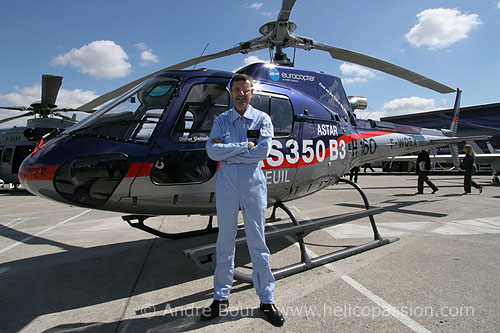 Come on Didier ! An interview with Didier DELSALLE, by Rebecca STOKES

On the 14 of May, 2005, Eurocopter test pilot Didier Delsalle braved the atmospheric conditions of 30,000 feet and landed his Ecureuil/Astar B3 helicopter on the summit of Mount Everest. Then repeated the feat, the following day. Delsalle a resident of Aix-en-Provence, France has been flying for 25 years and participating in mountain sports for even longer. His helicopter landing was purely experimental, but it does raise questions about the future of high-altitude rescue for climbers and potential tourism. Climbing Magazine was able to snag an interview with the busy pilot at the Paris Airshow.

Didier, you joined Eurocopter in 1997, how did you end up at their company ?

I entered the French Air Force in 1979 as a fighter pilot and two years later I was converted to helicopter. I've been a helicopter pilot since 1981, and I flew search-and-rescue missions nearly 10 years. After that I entered the test pilot's school, where I spent five years at the flight test center in France, Eurocopter asked me to join the company, where, since the beginning I have been an experimental pilot.  I am responsible for the small helicopters, which are the single engine family. As an experimental test pilot I fly on all different types of helicopters, from the small to the big.

Yes, when we prepared for the Everest adventure, we had to check to see if the helicopter could even do it. We checked with a production helicopter, because we wanted to show our costumers that a normal helicopter could do it. Then we had to prepare for the physical limits we would encounter, like very high altitudes. In France we tested if the rotor and engine would be able to climb. So I climbed to 10,000 meters as a test. During this period we broke the time to climb record for 3000 meters (9843 feet), 6000 meters (19,685 feet), and 9000 meters (29,528 feet). It was a good way for us to measure the margin of error and the power that we had.

When we got to Nepal, we didn't know our flight zone. The first part of my flights were spent discovering the area, finding the good ways to approach the different summits. At these altitudes you can find winds up to 300 kilometers per hour (about 190 miles per hour). We had to find the location of the updrafts and the downdrafts. We had some surprises; for example, I found an updraft so powerful that I could climb nearly without power. On the flipside, I had to descend with the full power of the engine and I was barely moving down. I had to make a chart of the areas to avoid, and test the measurements by gradually climbing.

As for the South Col, we were pretty sure we could take off and land on the South Col, but the summit we didn't know. We weren't hoping for much beyond the South Col, then little by little, I realized I would be able to land.

So you landed on the morning of May 14 and then you did it again the next day. What made you decide to land twice ?

You do it one time and think, “I am very lucky, perhaps it's a miracle.” To prove that it wasn't, I did it a second time, but the weather conditions were worse the second day. We didn't want to wait too much for better weather, because we knew that climbers were down there. One of the points of this mission was to not endanger  the climbers, so I decided to try to land in marginal conditions. Better weather would of meant many climbers, and I didn't want to harm anybody with an avalanche. It is so incredible to climb there on Everest.

What is special about this helicopter model the Ecureuil/Astar B3 ? Have you done special modifications on it for altitude ?

It was important for us was to test a production helicopter; it will be put to work at the end of this month, in the military. The only change was the weight. We removed all the comforts, like the unoccupied seats, we reduced the weight by 120 kilo (about 265 lbs). I also had only one hour of fuel.

What modifications must a pilot do, such as oxygen mask, pressurized cab of the chopper ?

I was equipped with an oxygen mask because I am not accustomed to high altitude. I took off from 2900 meters (9514 feet).

I like my single engine, the B3 is a very capable aircraft; you can take it upside down. Don't forget I was a fighter pilot in the beginning and I like to do maneuvers.

You had a month long permit to land on Everest, was it hard to get permission from the Government of Nepal ?

It was a little confusing, we were in Nepal in the 2 of May to the 24. We had to start working with the Government in January to get permission. We gave the Nepalese the flight-test program we had planned: the flying, landings, and approaches.

While you were in Nepal you flew a rescue mission for the Nepalese Government, you rescued two Japanese trekkers, correct ?

Yes, the trekkers who were around 5000 meters (16,400 feet); one was tired and one had high-altitude sickness. I had to wait two days because of the weather. When it cleared it took me only 15 minutes to go there and 15 to get back. It saved them nearly four days of walking.

What motivated you to land a helicopter on Everest? Did something intrigue you about the mountain ?

The motivation, well, the first part is the humanity, people want to go faster, farther, and higher. The second part is that I have read lots of books on Everest, because it is a mythical mountain. I have read stories about tragedies, especially the main one in 1996, and I hope that someday we can rescue people that high. I flew search-and-rescue for ten years and I am still a search-and-rescue pilot. When you have someone in your helicopter that you have just rescued, you can see something very deep in their eyes, they are saying thank you, and it's the kind of thing you never forget.

What was the hardest part of landing on Everest ?

The hardest part was to find the good way to get up there, because of the fantastic updrafts and downdrafts. The wind at that altitude is so powerful, you can feel the hand of nature, and that nature is above all the power of humans. You have to understand how nature is working there. To find the good way to land, you have to be accepted by the mountain, if you want to force the mountain it will reject you. You have to go slowly and carefully.

Do you think a tourist business will come out of this, meaning people wanting to land on the top of high peaks ? And how many years in the future do you think it could be before helicopters are relatively safe at high altitude ?

I read in some newspapers that they were saying that you could go to the summit for tourism. It is fluff. In the near future it is completely impossible, this was an experimental flight, not commercial or tourist.

To guarantee the summit of Everest,  five, six, seven years, I don't think so. It is much too difficult, even if you build a very powerful helicopter, the forces you can encounter there are more powerful than the helicopter, and it's no use to risk the life of a pilot and co-pilot. Even for rescue, I don't think so. You can save people up to 7000 meters (23,000 feet) on a quite regular basis. More then that, it would be very difficult.

Do you plan to land on other mountains ?

Not for the moment. This is one part of my job; we have a lot of other tests, especially tests that the public doesn't know about, like demonstrating engine failure mid-flight. I am not searching for another record or fame. I'm trying to just live my life, but we'll see what happens in the future, though it will difficult to match this record.

I am Sunday climber. I fool around in the mountains, but for me to climb at Everest makes me realize how strong the human being is. I am very humble and respectful in the mountains. I cannot compare to the real climbers on Everest. I really respect original climbers, the people who climb without support, many Sherpas, and big teams. I wouldn't like to go with commercial expeditions were all is prepared for you. I like to be by myself and I stick to very small mountains, like the Mont Blanc.

What other sports do you do ?

Skiing, some rock climbing, but only on Sundays. I don't say I am very experienced, I like it, but I have no time. You have to have a lot of time to learn these sports and I am six months out of my home each year. When I come back it's for my wife and my kids.

Have you heard of the Didier Berthod ? He's known for crack climbing, he has does a number of 5.13 cracks like Air Sweden, and From Switzerland with Love at Indian Creek, Utah, and Greenspit (5.14a) in Italy. There aren't too many big-name Didier's in the climbing world.

Can you say the name again ?

Ehhh … No. In the ‘60s, a lot of Didiers were made in France and Switzerland. 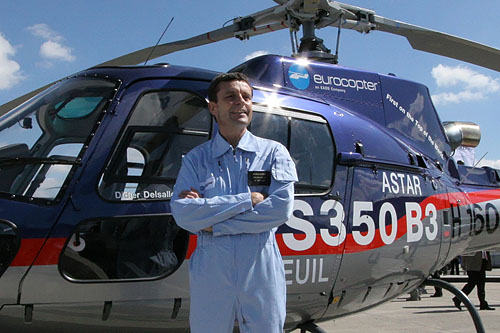 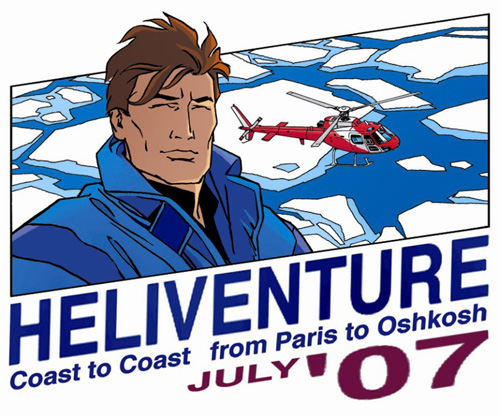 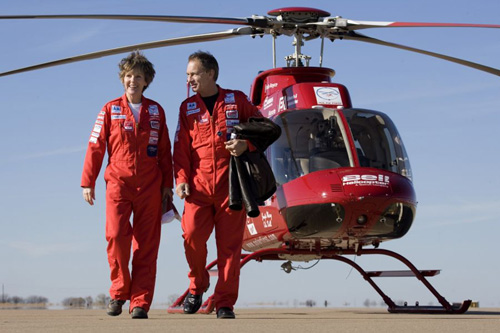 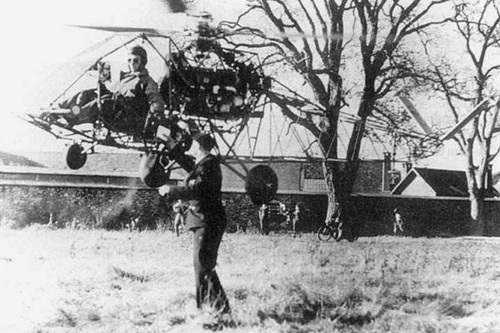 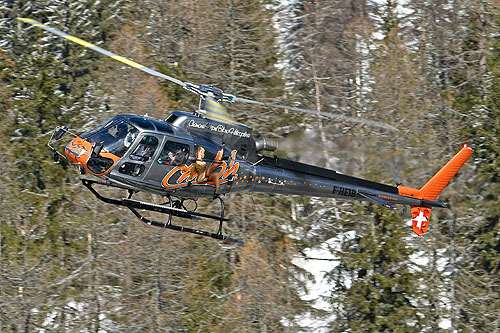 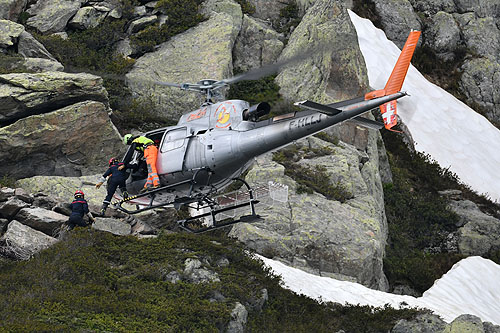 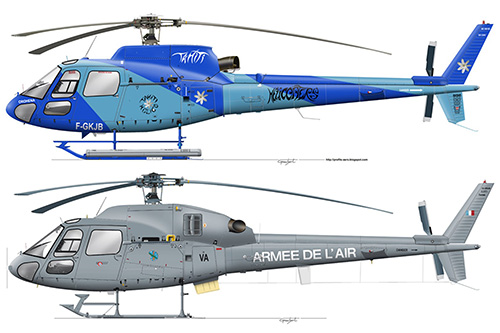 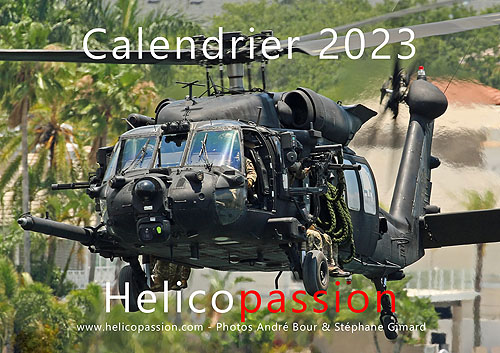